Atwood and fans had to wait while the invention got some final adjustments. When it came back to life, she used the LongPen to sign a copy of her new book, The Tent, for Nigel Newton, chief executive of Bloomsbury. While Atwood talked with Newton over a video linkup, the LongPen mirrored her hand motions and signed Newton’s book. She then signed books for her Canadian fans in Guelph, Ont., far across the Atlantic Ocean.

The idea here is a simple one: Atwood got sick of the demand of book tours, especially when she was being asked to be in more than one place at the same time. Finding that no device existed which allowed her to sign books without actually touring, she set up the Unotchit company in 2004. She hopes the LongPen can also “help authors sign books for readers in places not normally on promotion tours, such as small towns or countries.” 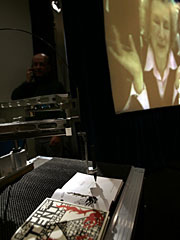 There’s been a lot of criticism about this. How dare an author sign by remote control? How can authors be close to their readers if they don’t even turn up for book tours? I only know a couple of famous authors, and my understanding is that book tours take up a ridiculous amount of time for very little actual purpose. Book signings are either crowded or empty, radio interviews inane and pointless, and all this saps the energy of the writer who would, presumably, be much happier back home penning their next tome.

The only problems I can see with this are if the gadget goes wrong and makes a mess on someone’s new book, or if the author mishears the intended dedication. I think on the whole it will add to the mystique. Who has ever met an author hero and found her/him to stand up to our expectations? Much better to be a hazy image on a screen and a disembodied pen scratching over a page of a proferred book. Plus it will, in theory, allow smaller booksellers to get a slice of the book-signing action, as well as authors with only a small but loyal audience to get a glimpse and a signature out of their heroes.