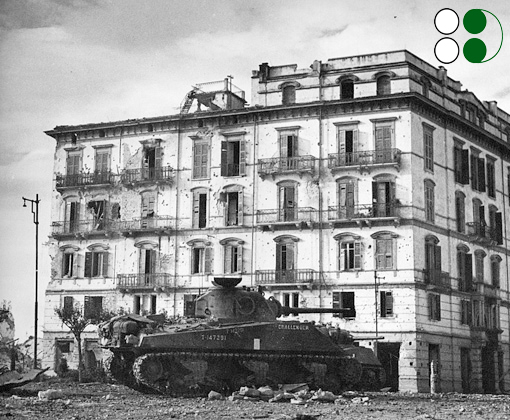 Part of my job is explaining the world of new/social media to old media veterans. It’s not easy, either because they’re very resistant to change, or because they tend to see the changes  being wrought on their industry as somehow different to the much bigger changes taking place.

It’s not a bunch of separate revolutions—it’s one revolution. For want of a better description, it’s not unlike the transition from the Dark Ages to the High Middle Ages. That’s perhaps overstating it, but compare, if you will, this small vignette.

I was chatting with a friend on Skype just now; he had returned to Canada to be with his ailing dad. I enquired more, and he told me his father had been at the Battle of Ortona, and still suffered from Post Traumatic Stress Disorder.

I know something of PTSD, but I was ignorant of Ortona, so I looked it up while we chatted. There’s a great Wikipedia page on it, so I quickly got a sense of what his father had been through, back in 1943.

Then my friend sent me links—to a book written about it, which I could thumb through on Amazon and search for his name.

I was able to quickly learn a bit about the battle, about my friend’s father, and about his wounds, both external and internal. Then my friend sent me another link, this time to a YouTube page that showcased a movie about the battle.

Within a few clicks I was much, much more knowledgeable about what this man had gone through, made more personal by my friend’s messages that dropped through Skype:

All of the officers he trained with were killed. He was the only one left.

He has one pal left who is still alive from those days.

It’s easy to dismiss this all as just bite-sized knowledge, without depth or perspective. But nevertheless what we have at our finger tips is so much more than was possible a few years ago—so much so that it’s no exaggeration to say that the Internet offers wisdom over darkness to those who came before it.

And for the media? Well, it’s not really about news anymore. It’s about wisdom. Information grabbed when needed to assemble an insight. The dividing line now is not between those who have access to information—everyone, more or less, has access—but between those who have the skill and interest to be able to know what they’re looking for and to find it. And then, of course, digest it.

That has huge implications for media because it transforms the market for information. It doesn’t remove it—it transforms it. We haven’t figured out how.

But we have already reached, without really making a big fuss about it, a great point of leveling, where we all can claw our way out of ignorance, topic by topic, surprisingly quickly. Whether we want to is something else entirely.

4 thoughts on “Into the Light”