It’s hard to read some of the documents released by the House Judiciary Committee without some rising bile.

What is clear — among other things — is that the internet as a commercial entity has spent more of its life dominated by companies determined on building walled gardens than it has a genuinely free space.

First a bit of history The internet as a commercial environment only came into being through services like AOL and CompuServe in the 1980s, which allowed users to dial in to a quasi-internet service via modem.

CompuServe was launched in 1977, though it wasn’t until the mid to late 1980s that it became a broader service. By 1989 it had half a million subscribers in the U.S., and had services in a dozen countries. (I signed up for it in Hong Kong in 1991, by which time it had 620,000 subscribers and annual revenues above $200 million.)

CompuServe was a walled garden, curating the content you could view and extracting a heavy toll via its subscription fees. It did have access to the internet, but it was limited. I could also send and receive emails from my CompuServe account to those with ‘real’ internet addresses, and vice versa, but that was pretty much the extent of it in those years. By the mid 1990s it was facing competition from Internet Service Providers (ISPs) — who offered a suite of apps to give you access to the web itself, and a dial-in number — and AOL. By 1997 CompuServe was owned by its adversary, although it still had a user base of more than 2 million.
(Source: History of CompuServe Interactive Services, Inc. – FundingUniverse)

Indeed, by 1995 there was really no point in having a CompuServe account: just sign up with a local ISP and you had the web to yourself. Suddenly we were away from the walled gardens and we were free to wander the web. There was only one catch: it wasn’t easy to find stuff — something CompuServe excelled in via its directories and spaces — until search engines came along.

I don’t know about you but I still think of that decade, from about 1998 through to 2008, as the halcyon days of user choice, when it came to search engines. We had Altavista, Yahoo!, Ask Jeeves, InfoSeek, Lycos, Inktomi’s HotBot, AlltheWeb, and of course Google. But look more closely, as I did with data I cobbled together from various sources, and you’ll see that Google had stolen the show from as early as 2003: 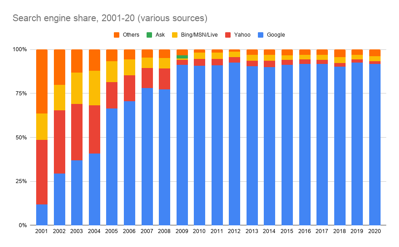 By the end of the decade Google was the pre-eminent search engine with a market share of more than 90%. Yes, Google was a great search engine, but as we know now, this loss of choice carried with it a cost: our world became Google’s world, and Google’s world became ours. It was a walled garden much like CompuServe’s. Only this time it was being directed to Google’s services, or to Google’s growing data trove by being watched by Google’s cookies, essentially indirectly paying Google a tax for its dominance.

But they weren’t the only walled gardeners in town. Once again, we think of the arrival of Apple’s iPhone, iPad and App Store as this liberation from the yoke of Microsoft, boring software and hardware, and a lack of anything interesting to do with your phone. And that is true. What we tend to forget is that Steve Jobs had no interest in delivering an experience beyond the walls of his own garden. It’s quite explicit in the documents, and it’s a sober reminder to me that Apple, from the start of its ecosystem, had no interest in helping the user unless it could cream off the experience.

Here he is in Nov 2010 telling Amazon to use Apple’s payment mechanism or get the hell out:

And here he is in Feb 2011 making clear he wants only one bookstore in the App Store:

There’s nothing unclear about this. There’s no weasel words about protecting the user, or ensuring their experience is as good as possible. It’s old fashioned rent-seeking and wall-building. And of course it’s obvious to most of us. I suppose what is surprising to me is how far back it went, almost to the start.

And Facebook and Amazon are no different. All four appear insatiable, according to the documents, to use their market dominance, for their customers’ benefit, but the opposite: to make sure the rent all other players pay them is maximised, and where competition and choice arise, to snuff it out quickly. There’s nothing in the documents that I’ve read so far (and admittedly, I’m only some ways in) to suggest that any of these companies had any regard for their users in any of the decisions being made and negotiations being conducted. Of course, there’s no need for them to do so; there’s no oversight committee or PR angle that needs to be put front and center. When the TV arc lights are out and they think no one is listening, it’s all about building those walls ever higher.

So, it turns out, as a historian, that the internet has been under the influence or control of walled gardens longer than it’s been free: arguably the only time when we had a significant degree of freedom was from about 1995 to 2002. Certainly by the end of the 2000s we were doomed. I find it intriguing to note that this period was maybe when the web was its most creative, coming up with many of the tools and principles that these technopolies took as their own. But I’ll save that for another time.